The Unlikely Origins of the Oscillating Multi Tool 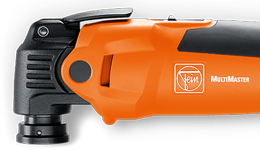 Around 2009, the oscillating multi tool seemed to come out of nowhere for the mass-DIY market.

Before then, power tools for more targeted cutting and shaping jobs were few and far between, except for those from specialist tool makers like Dremel. But even Dremel were only accommodating the prestige hobby market.

Since its founding in 1867, Wilhelm Emil Fein had been inventing products as a pioneering electrical engineer, from developments on Bell’s telephone to the first electric hand drill. This continued for many years, including the design and manufacture of many types of power tools. But in 1967, Fein looked beyond the trades world and identified a common issue in the medical profession: how to remove plaster casts easily without cutting the patient.

Instead of rotation—like the way circular and drop saws work, for example—Fein utilised an oscillating action for the blade. As we know, rotating objects will cut. Oscillating objects will only cut certain things – harder objects; oscillating blades need the resistance from harder surfaces to work, much like the resistance needed for a ball-point pen to dispense ink. Consequently, this style of blade and tool will cut the plaster, and less likely human skin, apart from the occasional minor burn.

Fein’s plaster cast saw sped up the process of cast removal and saved patients from further injury, and is still in use today through medical tech company Stryker and others.

Through close collaboration with the automotive industry, Fein eventually migrated the concept to the construction and trades markets, with the production of the first oscillating cutting tool in 1985. Born as the automotive body saw, the tool was designed for safe non-damaging removal of windows that had been glued into place with silicone.

And in the ensuing years, Fein tweaked the unit to accommodate several types of attachments, and the MultiMaster was launched to a market of serious tradespeople who were looking for a premium multi-purpose power tool. This exclusivity remained this way for decades—the unit considered the domain of high-end professional consumer—until Fein’s patent for the oscillating mechanism expired in 2009.

Since ’09, big hitters such as Bosch, Milwaukee, Porter Cable and even Dremel have released their own version of the product. And an explosion in the OEM market saw the shelves at hardware stores fill up with budget-conscious options from Ozito, AEG and the like.

Fein still stand, however, head and shoulders above the copyists. Still made in Germany, Fein’s products are being constantly improved via strict R&D processes, and continue to bring new ways for trades to carry out their work easier and quicker. In recent years, Fein were the first to introduce tool-free attachment change, eliminating the need for the fiddly hex key – the Starlock Plus system. And their Lithium-Ion battery life is one of the longest on the market.

Fein have also managed to address a very common issue in this category: noise. Many of Fein’s tools now operate with less vibration and run up to 50% quieter than their predecessors, something that a renovator’s neighbour would appreciate, and terrified patients with broken bones back in 1967.